A Fire at the Diamond Plaza 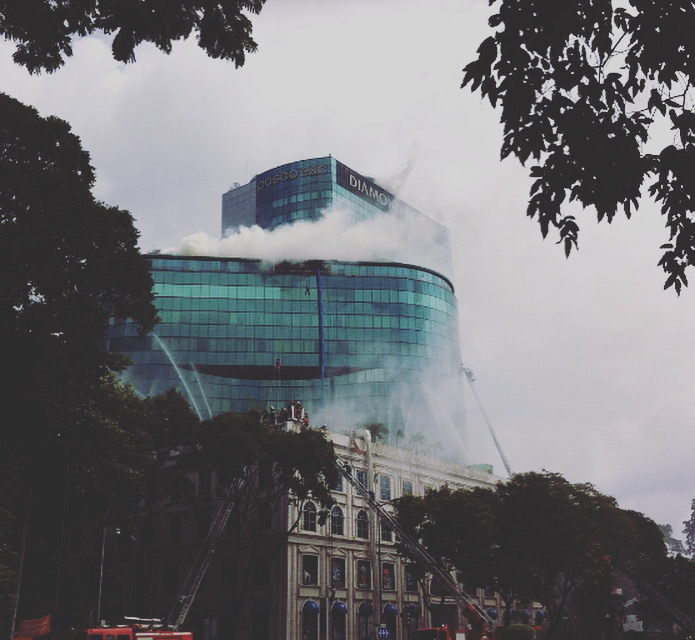 The Day the Vietnamese Government Nearly Burnt Down the U.S. Consulate

The summer of 2013 tested me. A North Korean asylum seeker tried to get into the consulate by smashing his motorbike into a vehicle gate. A consulate employee was tragically killed in a workplace accident that could have been prevented. And the Vietnamese government tried to land a helicopter on top of a burning U.S. Consulate off-site facility. Wait, what? Yes. I will explain.

On 29 October 2002 the International Trade Center, a luxury department store building with multiple foreign business offices was set aflame in Ho Chi Minh City. The fire department responded and had very little success. The department had no fire engines in the city that could reach the upper decks and the firemen were unwilling to enter a burning building from the ground level. Hundreds of Vietnamese and foreigners lost their lives.

The fire department failed. That incident and the dreadful performance by the Ho Chi Minh City Fire Department triggered the Vietnamese government into taking action. They did take action, eleven years later.

One week in mid-summer 2013 the Regional Security Office at the U.S. Consulate in Ho Chi Minh City received a phone call from our contacts at the local police department. They advised that on Friday the fire department would be conducting a drill. They wanted us to know.

The drill was to take place at Diamond Plaza, a similar structure as the International Trade Center that burned many years before. Diamond Plaza held a mall, food court, business offices and an off-site office for the U.S. consulate.

I was the acting Regional Security Officer at the time. I needed more details.  We reached back out to our contacts to learn more about the drill. The police advised us that barrels of gas would be placed on the rooftops of Diamond Plaza. The barrels would be ignited by firemen and when the barrels are lit the drill would start.

The fire department also listed that actors would be utilizing escape devices to get out of the building. They noted their plan to have a helicopter rescue that would attempt to land a Russian made Kamov KA-60 Russian on top of the building to rescue folks.

Business offices in the building were not allowed to evacuate their staff. By order of the Vietnamese government the companies could be fined if they did so. Yes, the government has this power. Finally, I was told that members of the local and provincial governments and Vietnamese Politburo would be in attendance in the bleachers.

Awesome, I thought; real gas, real fire, real building, real people. This ought to be good. I had to get my people out of there.

I reported back to our contacts that the U.S. Consulate did not intend to follow the non-evacuation order. I argued that this order should not apply to a U.S. diplomatic facility. Nevermind how insane the idea of the drill was, but local governments are supposed to protect foreign diplomatic facilities not use them as pawns in their games. If we were to comply with that order the Vietnamese government would be doing the opposite of protecting us.

After communicating with their superiors in Hanoi the approval for us to evacuate was given. That was a win. Now I just had to worry about property damage.

I gave my recommendation to shut down the offices to the acting Consul General who agreed. After multiple bureaucratic layers of approvals the Management Officer sent a memo to the U.S. Consulate staff of Diamond Place to remain home that day. I advised my guard force that we would lock up and walk away from the facility approximately one hour before the event. And that is what we did.

Completely closing a U.S. consulate in the middle of the week is very uncommon. Sure, we close at night time but guards always remain in place. In this case we needed to shut it down completely. This was monumental.

The day then hour came and I made my way over to Diamond Plaza to meet with the guards. We locked up and kept two sets of keys to get back inside. The guards and I walked across the street to the park where we waited to watch the show.

While walking we noticed bleachers set up on the backside of the famous Notre Dame Cathedral of Saigon, facing Diamond Plaza. Men and women in suits, military, police and fire uniforms were sitting and standing. A large screen was set up where a live video of Diamond plaza was rolling.

I looked through the park and saw fire trucks pre-staged near the former South Vietnamese government’s presidential palace. Firemen were crouched down behind the trucks waiting for the signal. They were ready to rock.

The drill began with smoke billowing from the top of the Diamond Plaza. A quick look through binoculars revealed large flames coming from the large pre-placed barrels. Then I heard a loud voice over a microphone. The woman, an actor, yelled in Vietnamese “Help! Help! Someone save me!”

The firetrucks jumped into action and rolled three full blocks to the plaza. Right as the trucks arrived and started to get their ladders up, the pre-placed escape slides deployed from the side of the building. Paid actors leaped from the buildings and down the slides.

Smoke filled the air. The firemen, now on the ladders, could not be seen through the thick cloud. Soon I saw the helicopter in the distance. The rotors of the helicopter whipping the smoke around the building.

Suddenly the wind from the rotors caused one of the barrels to tip over. Gas spewed everywhere. Fire was burning on the rooftop.  Firemen raced to extinguish it. Holy shit will this burn down the whole building?

The cameras turned towards the bleachers where the viewers were cheering in Unison – “Viet-nam, Viet-nam, Viet-nam!” It’s like they were watching a sporting event. Did they want the place to burn down?

The helicopter that just dropped ropes waived off. There was too much smoke. Actors continued to pour out of the slides. Firemen embracing them as they reached the bottom. What a production.

Fortunately, the Diamond Plaza did not burn down. The gas had burned off so much in the barrel that a minimal amount remained. The firemen put it out with ease. Maybe that was part of the plan.

After nearly an hour the smoke subsided, the helicopter was gone and the crowds along the street and in the bleachers began to dissipate. A loudspeaker indicated that it was clear to go back inside.

I made my way over to the Diamond Plaza, walked up the stairs, and arrived at the consulate doors. Besides a coiled up fire hose left in the lobby vestibule, the consulate offices were safe. That was a close one.